You are at:Home»Letters»A cycle of wonder
By clearmarble November 7, 2014 Letters

At the St. Kilda pier in Melbourne, Australia stands a marina, boardwalk, Edwardian-era kiosk and a rocky breakwater jutting out into the long tidal flat of Port Phillip Bay. Prevailing winds from the Tasman Sea sweep an outstretched beach of shimmering shell dust with clumps of dune grasses blown flat into wispy mounds. Silver gull, White-plumed honeyeater, Noisy miner, Silvereye, Willy wagtail, Laughing kookaburra, Crimson rosella, Grey and Chestnut teal, Australian wood duck, Australasian grebe, Black swan, Spotted turtle dove and Tawny frogmouth can be seen and heard from the foreshore to the date palms and amongst the eucalypti and flowering shrubs of the nearby botanical gardens.

“Little Blue Penguin”
In the wild the average lifespan is about 6½ years (in captivity up to 20 years). Reproduction numbers are a concern because they don’t breed until at least three years of age.

“Wonder is involuntary praise,” wrote poet Edward Young. In 1838 English ornithologist and bird artist John Gould sailed to Australia with his wife, illustrator Elizabeth Gould. Here they began a two-year odyssey travelling and collecting specimens for what would be their seven-volume monograph The Birds of Australia. With the help of artists Edward Lear, Waterhouse Hawkins and H.C. Richter, the Goulds would produce 600 lithographic plates, with Elizabeth making 84 plates before dying following the birth of her eighth child. She made hundreds of drawings while in Australia, though they were published under Richter’s name. Of the 681 species described in The Birds of Australia, 328 were new to science. 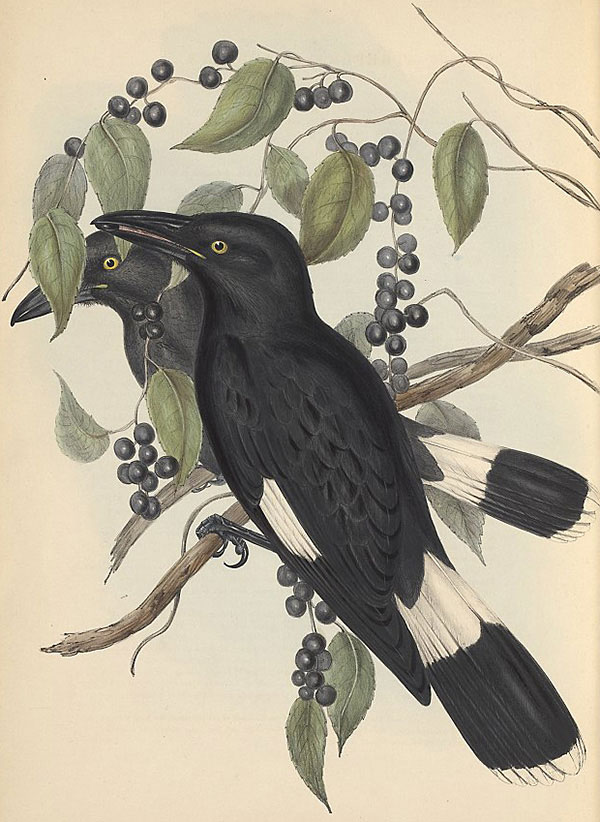 “Currawongs”
illustration from
The Birds of Australia
Previously known as crow-shrikes or bell-magpies, currawongs are not closely related to crows or ravens, however similar they are in appearance. They can be distinguished by their yellow eyes and comical flight pattern while foraging branch to branch among the trees and brush.

John Gould named each of them, including the Australian finch Chloebia (Poëphila) gouldiae, for Elizabeth. Charles Darwin’s On the Origin of Species and his theory of evolution by natural selection was informed by the Goulds’ Australian finches.

“Seven to eleven is a huge chunk of life, full of dulling and forgetting,” said Leonard Cohen. “It is fabled that we slowly lose the gift of speech with animals, that birds no longer visit our windowsills to converse. As our eyes grow accustomed to sight they armour themselves against wonder.”

“What I love about the currawongs,” wrote John Gould, “is the way in which they appear from nowhere and, for a brief period, rule the garden’s soundscape, only to disappear as quickly as they arrived.”

Little Blue penguins are found on the coastlines of southern Australia, New Zealand and sometimes Chile. Also called Fairy penguins in Australia and by their Mâori name, kororâ.

PS: “Observe the wonders as they occur around you. Don’t claim them. Feel the artistry moving through, and be silent.” (Rumi)

Esoterica: The breakwater at the St. Kilda pier is a strip of boulders packed with sand and sea grasses, perfect for a colony of Little Blue penguins — Eudyptula minor. Of the world’s seventeen penguin species, Little Blues are the smallest, averaging a height of 33 centimeters and weighing a kilogram or so. They can dive up to 20 meters and swim 4 km per hour. At dawn they hit the waves and dine on anchovies, returning at sunset to feed their chicks. At dusk, Peter and I walk the pier, past the locals casting for flathead, past the sleepy, bobbing sloops. We face the early summer breezes and the distant, fading pink of Bass Strait. At the breakwater, blinking into the gloaming, the penguins appear — at first singular, then in bunches, their little ones squeaking with hungry bellies. “There are still marvels in the world, because life is a mystery and always will be.” (Josef Albers)