You are at:Home»Letters»The last prisoners of war
By ShawnA June 15, 2018 Letters

Of the three million items to ponder in the Hermitage Museum in St. Petersburg, Peter and I have gravitated across the Palace Square to the comparatively meditative General Staff Building. As if our own little secret, behind its 580-meter long façade (the longest in the world) is a dreamy block of pastel-coloured galleries recently opened to the public; the new home to 74 French Impressionist and Post-Impressionist paintings unveiled after being thought lost for 50 years after the end of World War II. First titled “Hidden Treasures Revealed,” the collection opened in 1995 as a Soviet triumph of preservation and safekeeping.

At the heart of it, we stand before Place de la Concorde. Painted in 1876, Edgar Degas’ portrait shows his friend, French painter Ludovic-Napoléon Lepic, Lepic’s young daughters and his wolfhound mid-stride across the dusty Paris place, with the low Tuileries Gardens wall behind them. A breakthrough in modern compositional cropping and negative space, Degas had taken note of the snapshot qualities that were being captured that same year on film emulsions by early pioneers in photography. His mise-en-scene, all restraint of design, hints at the embryos of modernism, graphics, abstraction and colourfield in one virtuosic, golden ochre colourblock. A brushy rendering of Lepic and his companions floats in warm and cool greys, the whole thing held together by Lepic’s velvety top hat.

Sara at the Hermitage in front of Degas’ “Place de la Concorde.” According to Simon de Pury, the back is affixed with a label with the Gerstenberg address in Berlin.

Place de la Concorde’s recorded provenance begins with German art collector Otto Gerstenberg, an actuary-turned-magnate who nationalized life insurance in Germany in 1892. With his fortune he began collecting the drawings of Dürer and Rembrandt, then moved to Constable and Reynolds, then Delacroix, Géricault and the Barbizons. Gerstenberg bought 30 Daumiers and 10 Corots, got feverish on the portraits of Monet, Manet and Renoir before committing to landscapes: Sisley, then more Monet. In 1911, he bought Place de la Concorde for a hefty 120,000 francs. When Gerstenberg died in 1935, he left his collection to his daughter, Margarete Scharf. At the outbreak of the war, Margarete asked the Berlin National Gallery to take the artworks for safekeeping.

In 1945, the Red Army took a special bunker under what was once the Berlin Zoo and the paintings hidden there were crated up and sent by train to secret depositories at the Hermitage and the Pushkin Museum in Moscow. The seizure was part of what Germany claims are more than 2 million art objects (including 200,000 paintings) taken by the Soviet Trophies Commission as retribution for the Nazi pillage of hundreds of thousands of artworks from Soviet territories during the war. While the Soviets had returned 1.5 million of the artworks to their ally East Germany by 1958, the “leftovers,” what the Hermitage says it kept for “cleaning and restoration” or had been lost in the bowels of the Pushkin, have been trickling out of storage since the dissolution of the Soviet Union. Some newly unveiled works have turned out to be fakes, while others seemed to have quietly come from mysterious private collections. Dieter and Walter Scharf, Margarete’s sons, have been to see their family pictures here, including Place de la Concorde. Like many, many other victims of plunder, they were relieved to find their treasures intact and remain embroiled in their future destiny.

In this April 25, 1945 image released by the U.S. National Archives, U.S. Army personnel stand with “Wintergarden” by French Impressionist Edouard Manet, which was discovered in the vault in Merkers, Germany. As of Monday, Oct. 18, 2010, Holocaust survivors and their relatives, as well as art collectors and museums, can go online to search a historical database of more than 20,000 art objects stolen in German-occupied France and Belgium from 1940 to 1944. (AP Photo/U.S. National Archives)

PS: “The problem was now how to get the art back to the Scharfs. The Russians would not budge. It was one thing if the art was in a private collection; a public museum was another matter. The Russians looked at the art as theirs by right, the spoils of war of a victor who had lost a hundred million people to the Nazis. They didn’t steal it from Gerstenberg; Hitler and Göring did, and there was no chain of title from Hitler to Stalin. Luckily, the Scharfs were patient men and were thrilled that the art was safe and had not been destroyed.” (Simon de Pury, from his 2016 book The Auctioneer: Adventures in the Art Trade)

Esoterica: Failed artist Adolf Hitler had been denied entrance to the Vienna Academy of Fine Arts in both 1907 and 1908. In 1933 as Chancellor of Germany, in an effort to clean up the national aesthetic, Hitler purged the state museums of cubism and other work he called degenerate garbage and set to establish what would be a super museum of Nazi treasures in Linz. Military units called Kunstschutz stole, confiscated or forced the sale of gold, silver, currency, books, sculpture, decorative art, ceramics, religious objects and paintings from private collections and museums in the name of preserving for safekeeping the cultural heritage of German enemies. Hitler and his dignitaries personally amassed hoards. In 1945, a recovery effort led by the Allied Forces’ Monuments, Fine Arts, and Archives Program set out to return missing works to their owners, families and countries, while the Red Army took what they felt was equal compensation, then returned much of it to its East German allies. Many pieces remain lost. Russia has yet to make a full public accounting of the contents of its museums.

“I have never felt guilty. On the contrary, I have prided myself on how we managed to preserve these artistic treasures for our people…A new era has come and it is possible to speak about these subjects.” (Irina Antonova, director of the Pushkin State Museum of Fine Arts in Moscow from 1961 – 2013, the oldest and the longest serving director of a major art museum in the world.) 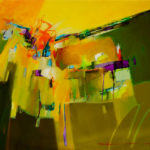