Today I’m laptopping you from a place called Picnic Point on Poplar Bay, Lake of the Woods, Ontario, Canada. Right now there’s not a picnicker in sight — there’s no one here save the loons and the warblers. Ancient red and white pines cling to lichened rocks — red carpeted between with last year’s pine needles. A soft wind blows, the lake sparkles, the water laps at the shore.

In 1929 Walter Phillips sat where I am. At that time the place was a summer destination accessed by canoe and gas-boat. Here, Phillips painted a watercolour of a back-lit pine clinging to rocks at the water’s edge. Today the pine is gone — replaced by others just as picturesque, but the painting lives on. Bill Mayberry, my Winnipeg dealer, who has brought me to this place, saw the painting briefly and appraised it some years ago. He has a photo of it in his pocket. Bill lost track of the owner and still wonders where it might be. Phillips used the watercolour as the basis of one of his wood-block prints.

Walter Phillips (1884-1963) painted gentle, carefully controlled, designy watercolours. An immigrant from England, he taught art in Winnipeg, Manitoba, moved west to Banff in the Rockies and then to the West Coast of Canada. His work is now collected worldwide. Attracted early to Japanese and European woodblock printing, he was inspired about 1915 by an article on the basics in “The Studio” which gave him, “all the fun of experimenting blindly.” As usual with this type of print, there was the problem of how to get soft edges. Phillips tackled this in several ways — gradated inking, multiple and feathered blocks, flat-grain woods with the grain showing. Phillips was an observant craftsman who brought new precision and design sense to the medium. In 1926 he wrote a book: The Technique of the Colour Woodcut.

Phillips worked this great, beautiful, nation-straddling lake. There are over 14,000 islands. Lining up points and rocks with features on the horizon, I can pretty well find out where he was. Some rocks make a natural seat and a place to put a box. A handy crevice locks in my water-bucket, and perhaps, at one time, his.

PS: “When spring is here the sketcher begins to look over his equipment and relishes in anticipation the soothing hours he will spend in the open, warmed by the sun, fanned by the breeze, charmed by the manifold delights of nature.” (Walter J Phillips)

Esoterica: The first block in a print is what is called a “key-block.” Often in black, this was generally a strong design to which the colours would later be added. Phillips worked in small editions (“Poplar Bay, Lake of the Woods,” was 100) with a dozen or more individual colour blocks for each. He was often in the habit of “custom” application of ink by rubbing a spoon on the back of the rather thin rice paper. Phillips produced 248 prints between 1915 and 1952. 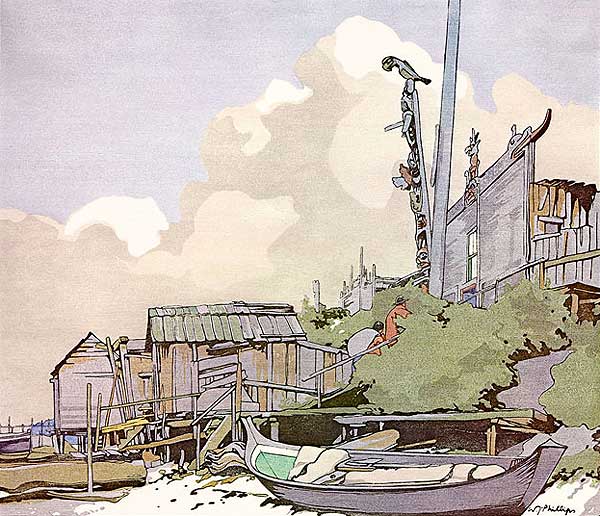 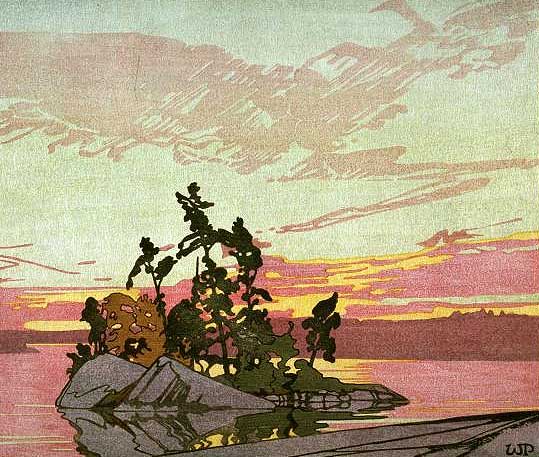 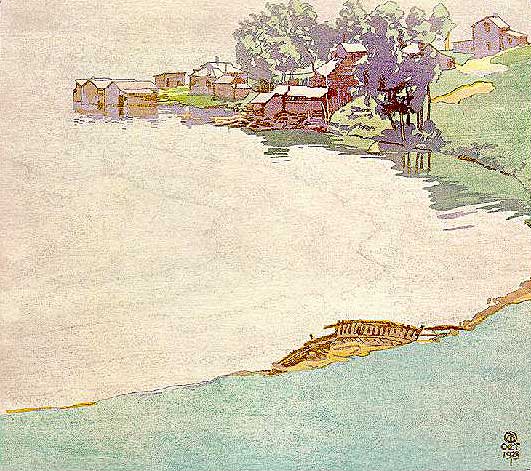 I was fascinated with your attachment to being in exactly the same spot where Walter Phillips painted at Picnic Point: having your “water bucket” where his likely rested. I relate much to this and confess to a strong desire to travel soon to Picnic Point too and situate myself in the same fashion. More than a desire to see what he saw, or to paint a similar image, my motivation seems more to connect with the sense of touch and knowing the Walter Phillips presence. I suspect viewing an original Walter Phillips painting would provide a similar sensation: perhaps more so as his brush strokes remain visible while his footprints at Picnic Point are long gone.

My weekend was similar in feel to what your letter captured. I felt the warmth of the sun, the cooling aspect of the breeze, and smelled the salt from the ocean. It was heaven on earth to have these comforting embraces of nature that simply plead to be released on canvas. It was a plea I answered with happy abandon.

Public not to be bullied
by Anonymous

Phillips was and still is an enlightened mind. Unpublished material by him has been collected by the writer Roger Boulet and can be found on the internet. While he spent much of his energy teaching, he was always an idealist when it came to an artist’s work. “The public is the tribunal before which all art is judged — not the critics or the academies. The public is the artist’s only patron, and has certain fundamental rights. It will submit to education, and will respond to suggestion, but it will not be bullied.” (Walter J Phillips)

Learning from a master
by Rich Williams, Calgary, AB, Canada

I can understand your desire to go to those places and locations he chose to paint. Sitting in those spots acts as a wick to our souls, pulling in the feelings experienced at the time, as well as a learning tool from his experience in plein air painting. In his book, Colour of the Canadian Rockies, he paints many well-known locations but he paints them from a different perspective giving the viewer a whole new outlook. The color transitions of his rockwork is legendary and something many have tried to copy.

I agree with Eckhardt Tolle but would expand on that to agree with the folks who discuss meditation: It’s “all energy” — thought forms, how we react/respond to them. If we can attune to the energy in the body and focus on moving it through the body, from and back into the center of the earth and from a neutral point in the cosmos and move into a calm, detached state, with love for the body as well, stress dissipates and it is easier to have a detached perspective on worldly problems. The power is truly within.

In 1986 I opened my own gallery and closed it in 1995. I spent a couple of years showing my work in a commercial gallery. Since then I have had the “cottage industry” in full swing, looking after myself, teaching for the rent money, and having “Open House” several times a year, staying away from the galleries, and the malls and out-door activities, that required dragging my work around. I am teaching out of my studio/home, taking the odd teaching job at the local Museum. I am producing all the time, no space on the walls, bathroom, or bedroom. I love it!

I truly love my life, and the “cottage industry” is flourishing. As long as one paints for the love of painting, and can move enough work on one’s own to pay for a simple lifestyle, a satisfying reward is there to achieve.

I received some oil pastels and had great fun doing some work on the Ampersand board and in my innocence thought it would be fun to just put on a finishing fixative and then have them framed like paintings. So I got some oil fixative (Sennelier) and sprayed two of them. They looked great when wet but dried in such a bad way that they were ruined. I need some help knowing what I did incorrectly. I still have one oil pastel not ruined and would like to do more work in that medium.

(RG Note) Thanks, Lucille. It’s difficult to know what went wrong without having the works in hand. With oil pastels, three or more really light coats of retouch varnish (by spray can) with plenty of drying between is the way to go. It’s also useful to start with a fairly shiny oil-based imprimatura. Oil pastels have different absorbency rates for different colours and it’s difficult to get them even–but a shiny ground has the tendency to stop the oil migration out of them.

So many moods
by Patty Rae Wellborn, Abilene, TX, USA

I struggle with so many moods and it seems that the direction of my painting starts contradicting itself. I realize how much of the time I feel this way as I struggle with feeling positively euphoric on some days and feel like I can move mountains and create with abandon and some days I can’t even get out of bed. If I go ahead and force myself to paint or to sculpt (and I tend to procrastinate when I’m afraid nothing will come) suddenly the floodgates will open, often before I realize what is happening. When I finish a painting I feel a sense of peace and relaxation or sometimes… the good feeling of being tired.

Using my imagination in creating art is something I have always wanted to tap into, but I’ve found it difficult. The difficulty for me is that I have not spent enough time creating art from life and, therefore have not memorized those “black pines” you mentioned, enough to paint them from memory. Teaching high school art allows me to share my knowledge and techniques with sometimes eager and sometimes reluctant students who wear me out by the end of the day, leaving little time and energy left to go out and paint for my own pleasure. I plan to go out and “memorize” as much as I can so that painting will be a creative experience. 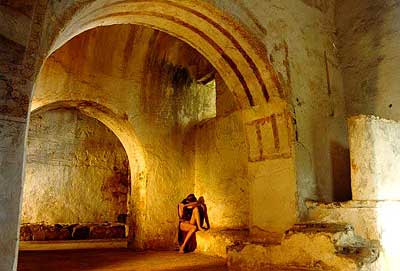 That includes Sujata Tibrewala who wrote, “Walter Phillips’ work is really good, nothing like what I have seen before. Never knew you could achieve so much in watercolour. Even though I am from a different country, as they say art has a different language and it does speak to me a bit.”

And Dan DuBois who says, “Just when I think I ought to chuck the whole enterprise and train for a fulfilling career in accountancy, or failing that, vagrancy, I pick up one of your columns, dutifully saved in hard drive under ‘art,’ for the al anon version of Dutch courage.”