You are at:Home»Letters»Tableau
By sara genn February 21, 2019 Letters

“You have a first image,” said Mexican director Alfonso Cuarón, when describing his inspiration for his new film, Roma. “You just know that it is always going to be there. You don’t question that.” In Roma, almost every scene is meticulously composed and timed in a wide-angle tableau of human drama and staggering beauty. Drawn exclusively from Cuarón’s childhood memories, the film is shot from the perspective of his beloved nanny, Libo, and tells the story of her inner and outer life as an indigenous Mixtec domestic worker in 1970s Mexico City. 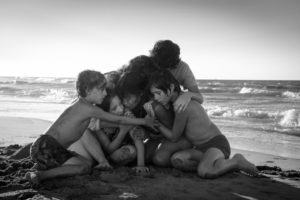 In painting and still photography, “tableau” is a figurative scene where characters are arranged in a composition to maximize beauty and dramatic effect. Originally a response to the conventions of portraiture, tableau characters are absorbed in drama and unaware of the existence of a viewer. French philosopher Denis Diderot assigned the term in the 18th Century to distinguish paintings that are beautifully composed, but still feel natural and believable, and include the important feature of the viewer being walled off, but able to look in. One hundred years later, Édouard Manet set a party on a picnic blanket facing outward to confront the viewer. To Manet, this approach shattered the idealism of tableau in favour of shocking eye contact between the subject and viewer. In 1959, French filmmaker Jean Renoir set Manet’s 1863 painting to film in his romance-comedy, Le Déjeuner sur l’herbe, a set-up Cuarón was keenly aware of when arranging his own picnic tableau in Roma. In order to evolve compositional conventions, Cuarón kept the screenplay from his actors, shot the film chronologically and only revealed plot essentials at the last minute. While some major sequences were rehearsed ahead of time, stand-ins were used to capture the real-time responses of both key and minor characters during filming. The effect is a straddling of Cuarón’s idealized lens of childhood memories and the breathtaking realities of Libo’s real-life story. 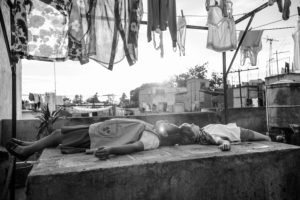 First-time actress Yalitza Aparicio in a rooftop scene from Roma.

PS: “I was just going to go for it. I wanted this to be about trusting these moments, whatever was going to come out. I didn’t want to be thinking about narrative, and this is the first project where I didn’t want to have any references.” (Alfonso Cuarón)

Esoterica: When his cinematographer was unable to participate due to scheduling conflicts, Cuarón shot the film himself on two borrowed and untried Arri 65 mm Alexa digital cameras known for their infinite range of values in black and white and total absence of graininess. This delivered a contemporary sharpness and realism, designed to look into the past without the soft-focus cliché of nostalgia. Cuarón also found a house, set for demolition, in the middle-class neighbourhood of Roma, Mexico City — across the street from and almost identical to the one he grew up in — and, with the help of his team, filled it with the furnishings of his own childhood home. He also had the roof removed to allow natural light into his shots. You can watch Alfonso Cuarón’s tableau Masterpiece Roma on Netflix, where it was released for digital streaming in November.

“I’m interested in new worlds, new universes, new challenges. I always said the only reason to make a film is not for the result but for what you learn for the next one.” (Alfonso Cuarón) 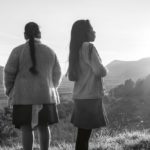 “There is only one passion, the passion for happiness.” (Denis Diderot)