You are at:Home»Letters»The subconscious eye
By sara genn April 16, 2019 Letters

Our eyes move toward those things already on our minds. A man passionate about model railroading, for example, is likely to look at a painting of a locomotive. But deeper cues move our eyes. Some of these stimulants are with us from birth and are a part of our psyche. Others are learned, selected and personalized by life’s preferences.

Recent studies have examined a variety of eye movements that include tiny flickers called microsaccades. Developed long ago as a focusing aid to hunting and gathering, they have evolved with us. Although these flickers are too fast for an ordinary observer to see, experts are now thinking microsaccades may be keys to innermost thoughts and desires.

Typically, you may be visiting with someone, but your attention is drawn to something else that happens to be nearby. It could be that last piece of cake on the table or that guy over there. Depends what’s on your mind. The wandering eye, even in its tiniest movements, is a window to the subconscious. Naturally, I’ve always been curious about visual stimuli. Here are a few eye-catchers:

The Lawyer Florynce Kennedy, in 1969
by Richard Avedon

Wet: Rivers, oceans, waves, streams. Water is elemental eye-candy in all its moods.

The human eye adores a massage. Mere subject matter — like that well-painted locomotive — may not always be enough. The subconscious eye seeks out atavistic desires. But painting Kewpie dolls and teddy bears would miss the point. I think it’s the more abstracted, devious stuff that really flirts with our minds. To the eye and the complex interpretive devices that are wired to it, suggestion may be more powerful than reality.

Esoterica: Microsaccades interpret the nature of still objects and help make them interesting. Without them, things fade from view. Curiously, certain species of frogs don’t have these small eye movements. Because of this they cannot see a fly at rest, but have no trouble snapping it out of the air with their tongue when it flies. The human eye has the reverse capability — it sees meaning and purpose in things that are still. Curiously as well, when shooting a rifle we humans are able to temporarily suspend the motion of our microsaccades.

This letter was originally published as “The subconscious eye” on November 18, 2008.

“If I could do what I want with my eyes alone, I would be happy.” (Richard Avedon) 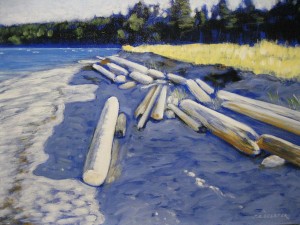