You are at:Home»Letters»Watching the ants
By ShawnA January 10, 2017 Letters

A subscriber wrote, “Are there any authentic, intellectually respectable reasons for the apparent divide between the contrasting and often opposing worlds of 1) ‘serious’ contemporary painting and its practitioners, and 2) the sprawling world of proud retro painters, and their constellation of activities and venues that are ignored by prevailing learned scholars and critics the world over?” 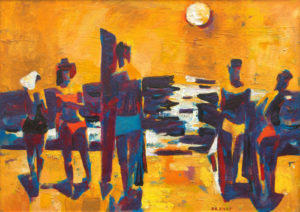 In the marvelous and diverse ant-hill of human creativity, there are many fine minds that have taken a crack at understanding and explaining the divide. It helps if you try to see some contemporary arts as a form of entertainment — and the retro-painting world as a form of craft. It’s of course proper to take the contemporary art world seriously. One ought not confuse the playful mind-bending entertainment business of Disneyland or Madame Tussaud’s Wax Museum (recently sold for over a billion dollars) with the sort of mind-bending business that might be going on at your local Public Gallery. High-brow entertainment serves many purposes. It stretches turgid minds. By the use of metaphor, it shows possibilities. It speaks of the outrageous potential of human imagination. With “schlock” and “shock” it may invite polarization and even anger. Furthermore, because many contemporary works are “conversation pieces,” the cultures of criticism, journalism and scholarship are supported. “Those “learned scholars” that you mention can get in on the action. 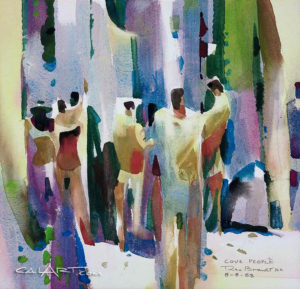 Retro work, on the other hand, is about dedicated private individuals developing time-honoured and often difficult skills. With craft these folks go after an elusive idea known as “quality.” Retro challenges the very hubs of human sensitivity and capability. The processes and techniques of retro give unprecedented joys of accomplishment and personal satisfaction. Surprisingly, retro is not so much concerned with fashion. But the result can be fine-tuned individuality and style. Retro, when excellent, is widely admired and naturally collected. But like a lot of noble activities there’s not much to talk about, so it’s often overlooked by the media. But for both the retro artists and their retro collectors — it’s one of mankind’s highest callings. 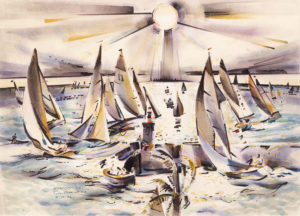 “In Praise of Sunshine”
watercolour by Rex Brandt

PS: “Shock value only lasts so long.” (Robert Longo) “It is in the search for quality that the artist is, of necessity, the eternal student.” (Rex Brandt)

Esoterica: Recently we were attracted to a video-piece in the Costa Rica Cultural Center. It showed a close-up of hundreds of leaf-cutter ants scurrying from off-screen into the foreground carrying newly cut sections of green leaves. The accompanying sound track sounded like the babbling rush of humanity. Every once in a while an ant would come on the screen bearing some odd object — a flag with a peace sign, a tiny surfboard, a small Da Vinci print. The busy, jumpy images mesmerized everyone who stopped to have a look. We liked it so much we came back another day. 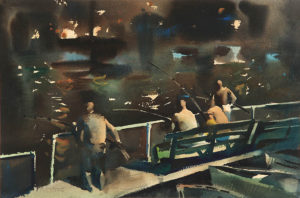 The Painted Word by Tom Wolfe. A short persuasive insight into the New York art world, what makes it tick, and why critics, dealers and the glitterati need something to talk about and how they can’t deal with traditional art.

The Shock of the New by Robert Hughes. An expanded version of a PBS television series on Modern Art. Many colour illustrations. Choice anecdotes, telling characterizations and witty observations. It’s bristling with insight.

Theories of Modern Art by Herschel B Chipp. Required reading in some College courses, this is a great starting point in understanding the thinking of artists. Gag-ga but investigative. Documented through personal letters, manifestos and articles, the variety of belief shows what art can be.

Art for Dummies by Thomas Hoving. No insult here. One of the for dummies series, this remarkable overview by the well-known gallery director and enthusiast shows that it’s okay to be in love with all types of art. Basic stuff you always wanted simplified and lots of privileged, no nonsense information.

This letter was originally published as “Watching the ants” on March 25, 2005. 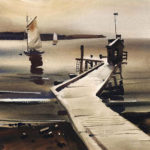 “Tension is anticipation and uncertainty. Every art has to have it.” (Rex Brandt)