You are at:Home»Letters»Funding art
By ShawnA April 24, 2015 Letters

I’m laptopping you from the second row of a downtown movie theatre, where the Tribeca Film Festival is premiering one of its 100 feature selections. To my right slumps a solo, bespectacled cinephile, fine legs crossed in corduroy. To my left, a millennial can’t resist fondling her phone. Near hysteria, and in jangly bangles and bronchitis, she beeps with her seatmate while opening and closing her purse. 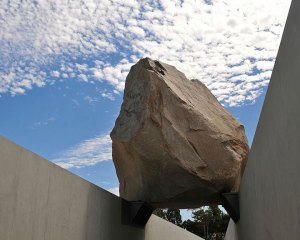 Levitated Mass by artist Michael Heizer is designed to last 3500 years and is on view on the LACMA’s Resnick North Lawn.​

Afterward, the cast and crew stand under a yellow spotlight to answer questions. Even with a few heavy-hitters under his belt, the writer/director smiles with the first blush of love as he talks about how the film got made. He draws an imaginary arc on the floor with the tip of his shoe, gazing dreamily and clutching the mic. The actors eyelash in a row beside him. Even the Oscar-winner, squinting into the audience’s iPhone flashes, has acquiesced in this moment of scrappy togetherness.

Earlier, I stood at the back of a small, black-event space in the Meatpacking district and watched the movie’s producer shake hands with the room. He’s here to sell. Amongst the champagne cocktails and mini-beef-sliders, my producer-friend hustled between huddles of darty eyes like a bee to his blossoms. “In the beginning I was an outsider, too,” he told me. “Now I’m on the inside, and it’s just a big party. I’m working all the time. I like to make films, I like to solve problems, I’m always finding money.” 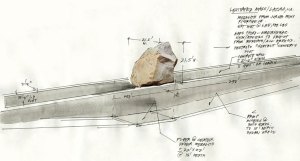 Heizer’s 2011 sketch of the 340-tonne boulder and trench installation for the Los Angeles County Museum. The 150 million-year-old granite megalith took 11 nights to move it from its quarry.​

We painters have it easy. Unless we’re working in diamond dust, our funding is simple. The cost of making a painting is positively monk-like in comparison to making a blockbuster. And we don’t have to sell the thing half a dozen times before it can get in front of an audience. Some might say you’ve got to gamble big to win big, but in the world of art, great oaks from little acorns still grow.

Recently, art critic Jerry Saltz wrote a review of the new Whitney Museum for “New York” magazine. In his introduction he described the recent travesty of contemporary art museums’ quest for bigger and more costly spectacles. He used words like “fun-house” and “photo-op.” He made an example of the Los Angeles County Museum’s $10 million installation of a boulder suspended over a trench. Saltz reminisced about his childhood wanderings with his mother through an art museum’s permanent collection and the life-changing discovery of room upon room of simple storytelling on canvas in pigment and brushwork. It was love, and it was priceless. 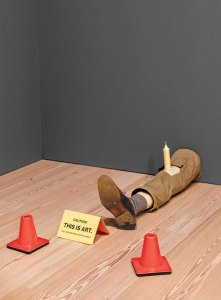 Untitled, by Robert Gober (1991), in mid-install at the new Whitney Museum of American Art. (The cones and sign are not a part of the piece.) Tim Davis photo​PS: “I used to be a yes-man. Now I’m a no-man.” (Anonymous)

Esoterica: Amongst the festival parties and next-day lunches, my producer friend gets to hang with his cast and crew, and soak up the downtown vibes. Spring teases with a balmy, Prussian sky and apple blossoms, casting the iron facades of Tribeca with a heightened romance. Late into the night, the producer’s biggest star takes him uptown to the home of a friend — a painter — to be changed by the freedom of a paint-splattered floor. You can’t put a price on it.