You are at:Home»Letters»Butterfly
By sara genn May 28, 2021 Letters

When Eric Carle was a little boy, his father would walk with him in the forest near their Syracuse, N.Y. home, where they’d explore the bugs and worms that scurried from beneath pulled-back tree bark and overturned rocks. Afterwards, they’d replace the little creatures’ hiding material. Eric, enchanted with these noble worlds, carried this happy memory into adulthood. He’d been working in the promotions department as a young graphic designer at the New York Times when a children’s author saw one of his drawings and asked him to illustrate a book. Thrilled with this project, Eric decided he wanted to tell stories, too. 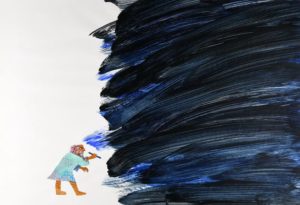 When he was six, Eric’s mother, a German immigrant suffering from homesickness, moved the family back to her hometown of Stuttgart. It was 1935, and Eric’s father was drafted into the German army and imprisoned by Soviet Forces in 1945. Eric, who was 15, was conscripted by the Nazis to dig trenches on a 400-mile defensive line in western Germany. His father returned home in 1947 devastated and emaciated. After studying art in Stuttgart, Eric gathered $40 and moved back to New York. Once there, he himself was drafted into the U.S. Army during the Korean War and sent to Germany to work as a mail clerk.

Illustration from “The Very Lonely Firefly”, 1995
Collage
by Eric Carle

By 1969, Eric had returned to America and was freelancing as an illustrator. He’d been punching holes in a stack of paper when the idea came to him of a bookworm who eats a book over the course of a week. The pages would include holes for children to poke their fingers through. When he showed the idea to an editor, she, not fond of worms, asked if he might change his protagonist to a more “likeable” hero. Eric pivoted to a caterpillar who eats his way through increasing quantities of fruit, moves on to decadent desserts and gourmet deli snacks before getting a stomach ache, then switches to leaves, pupates and emerges as a butterfly. He called his story, The Very Hungry Caterpillar. 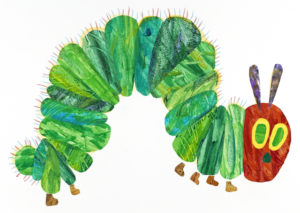 Illustration from The Very Hungry Caterpillar, 1969
Collage
by Eric Carle

Esoterica: Eric’s creative process involved channelling himself at six. He painted colour onto tissue paper with his fingers and sponges, then cut and collaged it with wallpaper glue onto an illustrator’s board. He folded eight sheets of paper into 32-page “dummy books,” where he could design a “story in pictures.” He laid transparencies with text over his illustrations, limiting himself to 200 words. If he lost confidence in an idea, he’d put the pages away in a box. If the idea reignited his imagination at a later time, he’d work on it again, sometimes over years, until it became a thing worth sharing. The Very Hungry Caterpillar, Eric’s third of approximately 70 published books (he said he’d lost count at some point), has sold over 55 million copies since it was first published in 1969. “I often think of myself when I was little,” he said. “I had a lot of feelings, philosophical thoughts — at the age of 6! The only way I got older and wiser was that I got better trained. But that brain and soul were at their peak.” Eric Carle passed away on May 23, 2021 at his studio home in Northampton, Massachusetts. He was 91. 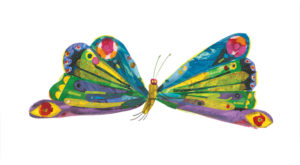 llustration from The Very Hungry Caterpillar, 1969
Collage
by Eric Carle

“What answer to the meaning of existence should one require beyond the right to exercise one’s gifts?” (W. H. Auden)

“Some children have said to me, ‘Oh, I can do that.’ I consider that the highest compliment.” (Eric Carle) 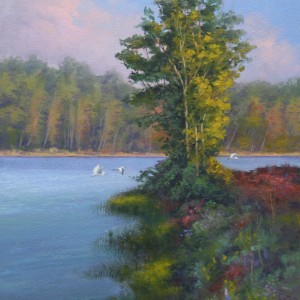