In the last clickback I included three of my Photoshop efforts. On Friday morning my inbox gagged. Apparently, this is a hot topic. Gary Glenn: “I would rather choose the painting of a monkey over anything generated electronically, because I am more fascinated by the direct evidence of a mind at work than I am by the output of machines.” I was also reminded of the words of Kasimir Malevich: “With the most primitive means the artist creates something which the most ingenious and efficient technology will never be able to make.”

(At this point we realized that the studio computer was slowing down because of all the digital attachments that were coming in. “Why don’t we do a special edition on digital art,” I blurted out to Andrew and Carol Ann. “The sort of thing artists are up to on the computer when they’re not doing their thing.” Then Andrew said: “We need to get the info on how each one was made.” And Carol Ann said: “I’ll bet there are more doing it than we think.”)

Right, and it’s not just a lot of hot air — there’s some pretty serious folks out there — they see the future in digital. Mostly, right now, they’re in it for the joy and the challenge. They don’t just have Photoshop in their box. They have Coreldraw, PhotoPaint, Ray Dream Designer, Fractal Design Detailer, XenoDream, Fractint, TieraZon and Flarium. And a few extra “plug-ins” as well. Some of them produce prints on photo-quality or acid-free paper with ink-jet or colour-lazer printers that can cost in the tens of thousands. It’s a cyber-studio with undreamed tools — a palette of a billion hues — a magic land of new and outrageous possibilities.

By what’s coming in right now, it looks to me that basement operators are doing interesting stuff. And the purists are looking down their noses. The critics are considering their navels. Some of the schools are thinking about it. As I write this letter, digital art has not yet made it into many of the Main Street galleries. Wait a minute.

Going up in the balloon, the “Wizard” calls out, “I can’t get it stopped, I dunno how it works.”

Esoterica: As artists we soon find out that the business of creation is a bit of a mystery. How does the human brain cross this with that? And what miraculous digital code can make something into something else? And by the way, what can it do for me? If you’re in the mood, I invite you to share your images with us and then we’ll publish a selection. If possible, please include your notes on methodology. Thanks for the pixels. 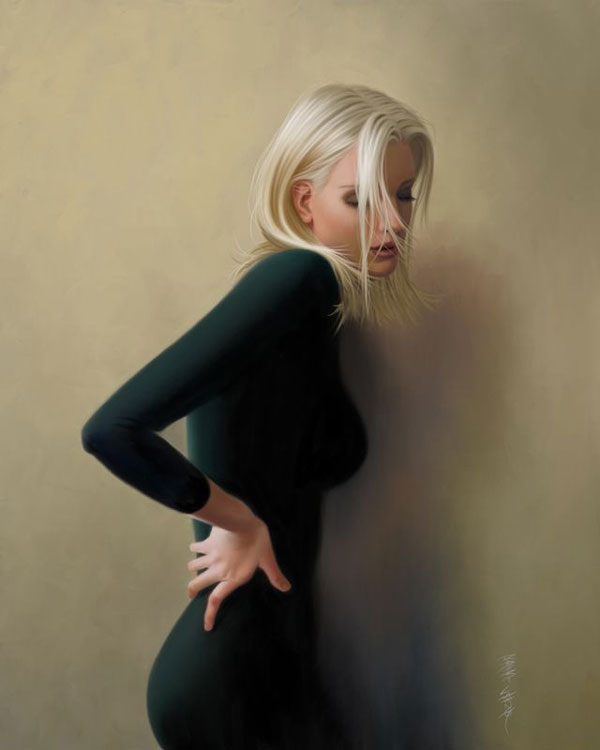 “I’ve been trying to paint something digitally that looks indistinguishable from traditional oil painting for a while now, and I think I’ve finally done it with this piece. I love Painter 7. I used only the palette knife for this entire painting. I was originally trying for that ala prima look again, and someone had suggested that I use a tool that’s incapable of producing fine detail, that way I won’t render it to death. Well, looks like I still rendered it to death, but with nice results this time. The reference for this painting was a magazine clipping I liked. The model had different face, a much slimmer figure, and a lot less curves. I like ’em a bit more voluptuous, so I gave her some “padding.” 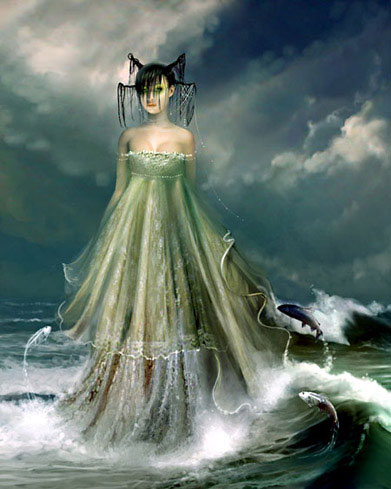 “All I have loved is gone”
Corel Painter & Adobe Photoshop
by Linda Bergkvist, Umea, Sweden

“I tried to make her incorporated into the sea and yet apart from it, and I used colours in tones that felt dirty and ‘old.’ I didn’t want the look of a clear, beautiful, fresh ocean. Something that few people notice is the fact that the fish are dying. Imagine the image as a clock, with her being 11:59 and 12:01 all at once, and the fish being moments in between. For the clouds, I used a combination of a round, sharp edged brush, a brush with blotchy edges and the smudge tool on a custom brush. The frothy water was created in almost the same manner, minus the smudge.” 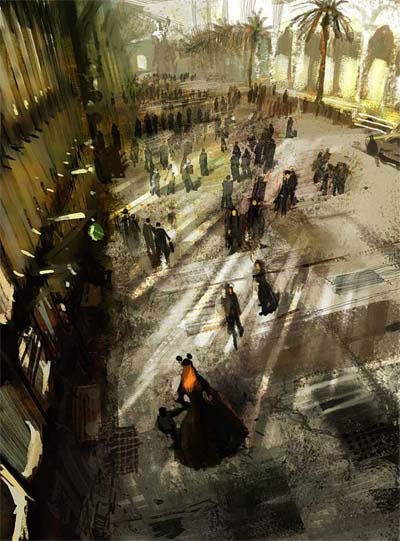 “This is from a series that grew out of nothing, and there is no story behind it. The common thread is a lady in a black Victorian dress wearing Mickey Mouse ears with a young boy traveling around some kind of air/spaceport. I have done about 5, don’t know if I will do anymore. I have been trying to use Painter and Photoshop together, or really switching back and forth, using both at their strengths. For this one I took my own advice and used a screen grab from a 3D program to get the basic convergence.”

Persons who pooh-pooh
by Peter Trent

Is it not strange how often ideas, concepts, prejudices, biases and the like get cycled ! In this I refer to the very common cycle of persons (note the careful use of political correctness) who pooh-pooh a new concept, in this case, that of digital artistry. Not too long ago the same breed of person was declaring that painting as a money-making livelihood was absolutely beyond the pale. Others took a look at those who aspired to build and fly aircraft as being totally crackers because ‘if it were intended for man to fly, he would have wings.’

In the nicest possible way, Have you had your head in the sand these last 10 years? I call myself a digital artist, and have had several electronic pieces shown in galleries here in England and abroad. There is and has been much debate around the subject, but the major institutions, art galleries and museums have exhibited and used digital imagery. Indeed, the Guggenheim is at the moment building a virtual reality site, a prediction I made when I did my Master and made a virtual gallery to show digital art work in.

Strictly speaking neither software, nor computers are tools. A tool — a hammer, a brush, a knife — has a direct correlation between the manipulation of the tool and the effect. Part of the pleasure of painting or potting with clay is the “con-natural” experience. You know your “stuff” and mix and mash and smear with all your physical and intellectual and emotional being involved. At a computer there are a few million lines of script between your mouse or pen or senso-screen and your product. There’s no “stuff.” It is a tool in the sense that it is something that can be used well or used poorly, but it just makes it possible to skip the real essence, avoid the nitty gritty; with a computer less seems to be required of you.

Expressing the imagination
by Dianne Bersea

I do feel that it takes a lot of practice and experimentation to rise above a computer program’s built-in logic, someone else’s creative mind-set. But it’s not dissimilar to the use of any other tool. There are those who use a tool by rote — ie. paint by number, art kits — or who never really explore what a tool can do, or hesitate to express their own imagination. It’s a package deal! Virtuosity equals creativity plus facility with tools plus a willingness to ‘spend-the-time’ and make an investment in the outcome.

I admire those folks who can maneuver around all the wonderful electronic art creation and enhancement programs. Wonderful images are being created, and the educational value of creating, organizing, and composing is literally unmatched. Good or bad, the art world is expanding to include digitally created images. The big decision is, as artists, how is our time on this earth best served? Sitting on our ever-growing posteriors glaring at an addictive electronic screen, or moving around an easel with the world as our subject. It’s a personal choice, and the debate will surely draw heated discussions from all sides.

Digital art/digital effects I’m sure will be viewed in the future as just one more medium in the artists’ arsenal. It took an awfully long time for photography to be assimilated into the fine art world — remember all the reservations about acrylic? We are just going through an intense learning curve. We are only beginning really, by first of all copying traditional art media in appearance. I believe the real breakthrough will come in creating something never seen or been possible before. We are pushing for it — just like the difference in vision between say realism and cubism/impressionism/abstraction.

Getting used to it
by Ian Bertram, Melksham, Wiltshire, UK

I’ve been thinking about the idea of digital art as I work through an archive of some 10,000 photographs taken over 30+ years. Initially my aim was to preserve them from fungus, scratching and fading but as I gained experience with the software I became more confident and began to believe that what I was doing had validity of its own and could stand up for itself. 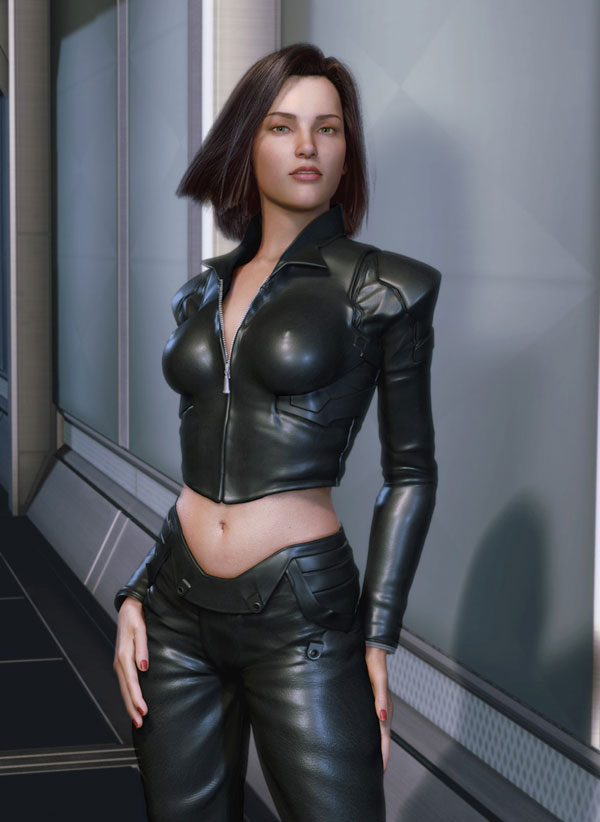 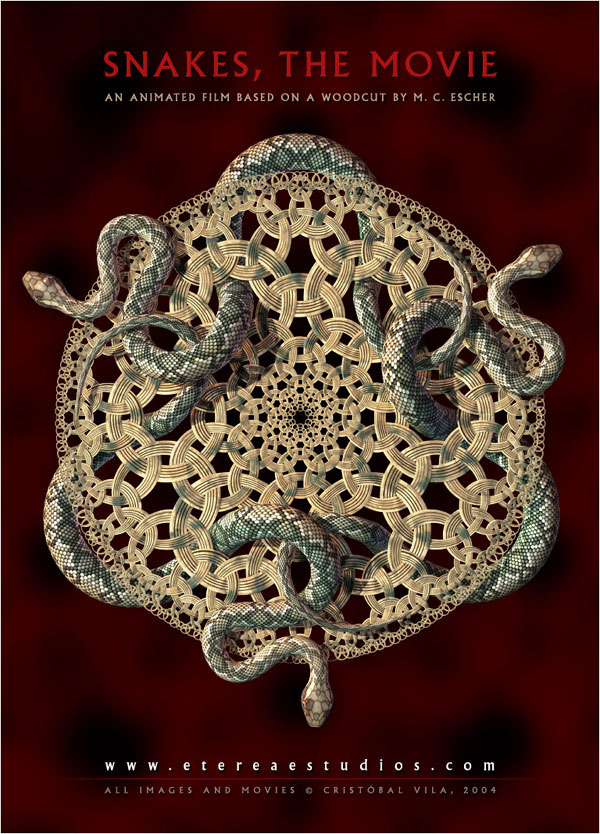 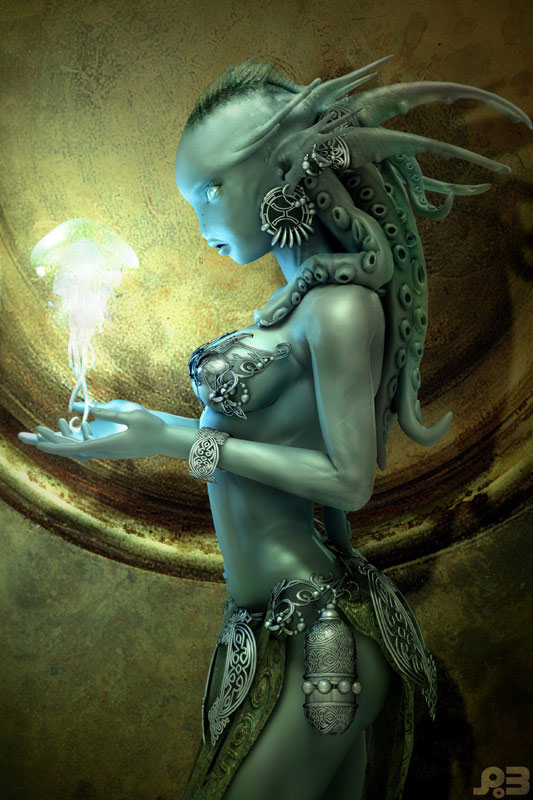 Emyn Muir painted with Adobe Photoshop by Yanick ‘Dusso’ Dusseault for The Lord of the Rings motion picture. It starts with the original live action shot (leftmost), then the sky extention is painted (middle) and the final shot is created (right). 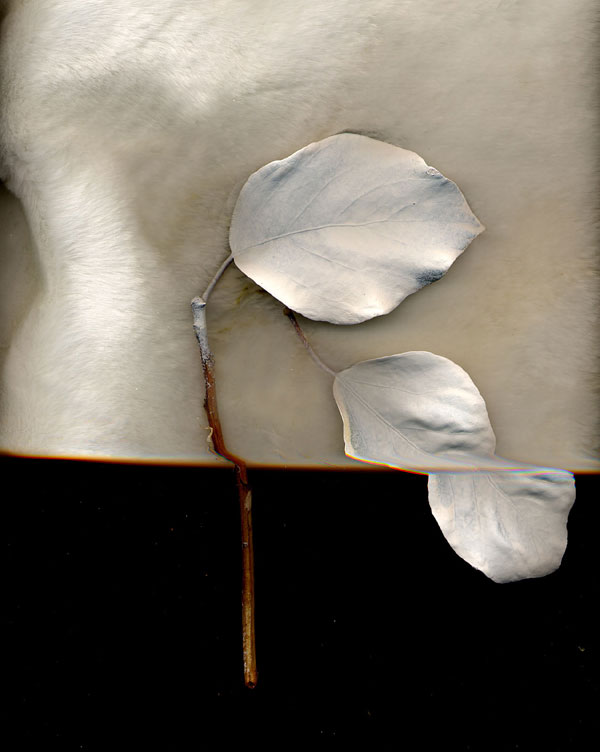