Artists write to say that they can do it one day and not the next. Simple as the problem may sound, it has always been a great curiosity to me. Some time ago I invented a method called “IAEAS.” It sounds Zeus-like, like a Greek god, and in a way it is. It stands for the “I’m An Extraordinary Artist System.” Before you turn me in, let me explain:

Lack of confidence is an ongoing scourge to both amateur and professional. It presents itself in the form of a block. Compositions self-destruct, brushes fiddle, ideas wither and abort. The causes are many and specific to each artist. They include negativity, jinxes, attitudes, fears, clutter, anxiety, guilt, debt, previous failure and the plain ordinary blues. Can’t do it, won’t do it, takes over.

Artists must know that bouts of incompetence come with the territory. IAEAS works by allowing yourself short blasts of acting in an extraordinarily confident manner. It’s almost, but not quite, what the Greeks called “hubris” — insolent pride. The artist tells herself that she is not troubled by the sorts of concerns that other artists are prone to. She sees herself as a goddess of art and an island unto herself. If she so wishes, she may come to a primal state where trodden paths are not taken, where old tapes are overwritten. If she so wishes she may simply find a rebirth of her energy, her vision and her stroke. High hubris overcomes a tired brush. Flying from a prepared workspace (paint well squeezed) she takes a stand (stand up for a change) — an “attitude” that sweeps impedimenta aside. It’s a ploy — a Trojan Horse that you drag into your studio. Artists who try this system have found that when they keep it up for an hour or so, they can repeat the action. With repetition the habits are formed or reformed and the blocks can be sidelined. With this minor and forgivable self-delusion a kind of honesty arises. Simply and brilliantly, disabilities melt, process takes over and miracles begin again to happen. IAEAS means standing up tall for yourself. “Never bend your head. Always hold it high. Look the world straight in the eye.” (Helen Keller)

PS: “Walk to your easel casually, but with a dollop of arrogance.” (Harley Brown)

I have a little trick that stops me from banging my head against the wall when a painting’s just not working. I ask myself whether the canvas has more value to me as a painting or more value as a support. If it’s the latter, I cut my losses, sand it down and move on to being an even greater goddess.

I find a valuable confidence builder is a tall glass of mostly orange juice together with Vodka. Over a period of several hours it relaxes me and clears some of the clutter and “brush inhibition.” Vitamin C in itself is elevating. No one knows I take Vitamin C like this and I think in moderation it’s okay. It’s my secret, silent weapon.

People become so wrapped up in worrying that it becomes a habit also to worry about their art — about where the next inspiration will come from. I have come to accept my painting as a fact and function of life — like breathing. When does one ever awake and say, “Oh, I think I have lost the ability to breathe today, I have been breathing so easily the last couple of months, but I don’t think I can anymore?” This is a form of mental disability. Wake up! Henry Ford said, “If you think that you can or you can’t, then you’re right.”

I sometimes suffer a crisis like this when I complete a painting that I considered a personal challenge, the euphoria of success gives way to apathy. On this occasion it was triggered by a commission that I just can’t get to grips with — everything I try fails spectacularly. Procrastination takes over, I do anything to avoid wetting my brushes and putting brush to paper. Today I will try your “IAEAS.” I’ll clean my palette, and start afresh with a new (imagined) confidence. I’ll let you know if it works!

The IAEAS system banishes negativity and gives strength. All week I kept speaking myself into applying to a competition in a New York gallery. Confidence begets success. It is always better to give it a try than to make no attempt.

Not in a unique situation
by Sandy Nelson

I would like to thank you for sharing the IAEAS theory. Having struggled with a 3-month abandonment by the muse and a solo show looming in a month, I realize (and didn’t peg it before) that the negativity of personal relationships are the root cause of the block. While I will still stand in front of the easel and have difficulty chasing them from my mind, this will give me a tool to begin. Since artists spend so much time alone and working, we consider our situations to be singular, not realizing until we read something like your letter, that we are not unique in our problems… quite the opposite.

The underlying root of confidence is trust. In yoga we observe the thoughts of the mind without attachment so they don’t get in our way. They will move from confidence to doubt with or without us. Yet the true Self is steady and unmoving. The true Self is the seer of such mind activity and knows that it is not that movement. As meditation is practiced one can become comfortable with this space of stillness and there lies a well of creativity that is reinforced by trust as it proves to be very real and consistent. Then when I am in front of my canvas all I have to do is let go and trust, allow inspiration and imagination to lead. In this way I can go beyond the limitations of what the mind knows. In this way I am also liberated from the fear of failure because I don’t identify with it as who I am. What is created is all for the experience of awakening and when it hits the mark it flows like a river and when it doesn’t I am probably not fully surrendering and trusting. I may be going through the motions repeating past patterns and the outcome is usually an imitation of a more magical moment. It’s that old self — raised on dogma and fear. When I remind myself of the power of trust that awakens inspiration, I am home again in my truest form. It is that space undefined that I flow in with spontaneity and originality. Steady practice reinforces the ability to be in that space of light and universal support.

In his book Effortless Mastery, jazz musician Kenny Werner shows specific ways to get into the “extraordinary artist” state of being. When I was shooting slides of my new mixed media vessels, I was feeling intimidated by the demands of film photography. Taking Werner’s advice, I said to myself before each shot, “This is the most beautiful work I’ve ever seen.” I noticed that this made an immediate improvement in my state of being, and the filming sessions went much more smoothly than before.

I recently found Life, Paint and Passion by Michell Cassou and Stewart Cubley. It’s about painting for process rather than product. I would rank it with Art and Fear by Bayles and Orland.

The War of Art
by Gloria Wick

“Fishing on the Willamette”
watercolour, 5 x 7.5 inches
by Gloria Wick

I just finished reading The War of Art by Steven Pressfield. An excellent little book that deals with this subject. He explains how various factors block our paths to creativity and how we can overcome them. Pressfield refers to these as “Resistance.” An excellent word!

Sometimes it feels like I need superhuman strength to push aside the “Resistance” and get to the easel. Once I am there it feels like I have overcome great obstacles and beginning the process of creating my vision is the easy part!

I have a couple of home-made signs of various sizes and colours at strategic locations around my place that say, “I’m the expert.” They work for me whenever I get frustrated and want to give up or feel something is hopeless — usually repairs or a redo or just being overwhelmed. When I consider that I’m the expert and that no one else in the world can do what I’m doing, then I’m almost (nothing is perfect) always able to proceed — and normally without any further feeling of inadequacy or doubt or the need to consider the signs again.

After art school I found a similar technique to work when I began to call myself an artist. After some months of saying to myself and others: “I’m an artist,” etc., it became normal to think of myself as an artist and I became one. That is to say, I felt like an artist and it was comfortable to say it. That in turn made it so much easier to create and participate in the arts community.

Keep in mind, however, that I’m using these powers for good. One can use the same techniques for evil: negative ends like justifying unproductive or debilitating behavior, i.e. blaming things on being an artist (which in turn reinforces a stereotype about artists being shiftless, temperamental and unreliable).

Can do it again
by Karen Phinney, Halifax, NS, Canada

Recently, I was preparing to make my annual donation to an auction to raise money for a homeless kids’ shelter (I volunteer, also). I wanted to do something special. I did a winter street scene of Halifax, and it created quite a buzz! And it fetched $500 from the chairman of the board, no less, last night at the auction. Well, I was floored, pleased, excited — and worried. This morning I thought, “How will I ever do this again?” Pressure’s on. I now have people wanting to see my work, and commissions. It’s all a little overwhelming. But, I’m also thinking, “If I did it once, I can do it again.”

Curiously, by cutting school art programs the attention of people is drawn to art. Like those folks who camped out for six days and nights to start an art program of their own. Think of alcohol during prohibition, or sex during the Victorian era. More and more people are becoming artists. There is a need to make your voice heard in this age where we are becoming less and less empowered. Also, with regard to the comments made by John Stobart — no one pulled him up over them. In his reply he said that kids today don’t stand a chance as artists. My thought is that there has never been a better time to be an artist. 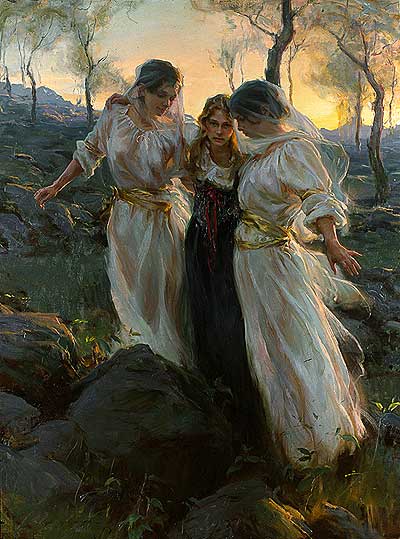 That includes M. Louise Krabill who wrote, “While painting in my studio this week I concluded that painting is like sex. What works one time does not mean it will work the next time.”

And also Virginia Haines who wrote, “For the woman who keeps a husband around — it is easier to steer clear of the studio and lose some of those creative juices.”

And also Laura Freas who wrote, “If one goes through the motion, then the emotion will follow.”

And Milly Spear who contributed the following: “John, come to the rescue of my dead painting now, and of my honor; I’m not in a good place, and I’m no painter.” (Note from Michelangelo to an assistant John of Pistoia, Sistine Chapel, 1510)