You are at:Home»Letters»Selection and rejection
By sara genn January 14, 2020 Letters

Norman Rockwell never called himself an artist. When I met him in his studio some years ago, he made it clear to me that he was an “illustrator.” I told him I loved cruising his paintings up close because his surfaces were so interesting, and that made him a “painter.” He told me he didn’t think painter was a bad word. 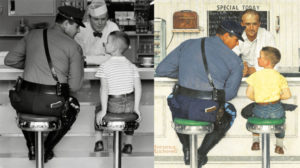 Over the years Rockwell has come under fire for his use of photographs. Norman Rockwell: Behind the Camera shows how Rockwell set up models and employed professional photographers to give him big black-and-white reference. That’s when Rockwell’s eye for selection and rejection took over. It’s the sort of thing all of us need to do whether we are looking at a picture of a human figure, the human figure itself, or a tree.

The Runaway, (1958) was set in a coffee shop with a little boy, a cop, and a soda jerk. Some pens in the soda jerk’s pocket coincide with the boy’s nose. Out! The burly cop is beefed up into a real heavyweight for greater contrast with the puny kid. The kid’s arms are pulled in to show he has something to hide. Rockwell knew that in silent media, body language counts. The photo also shows the background to be cluttered and indistinct. In the painting it’s simplified with the addition of a wall-radio and a blackboard menu — two icons of American life. I invite you to cruise for yourself. If it were your painting, you’d probably find other things you might have changed. 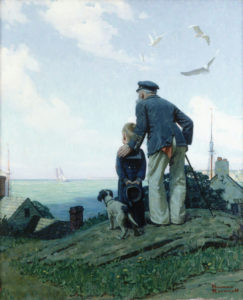 Some selections and rejections can appear to be arbitrary, perhaps merely the result of whim or preference. The brim of a hat may be wider or smaller; a hat may be on or off, or even replaced with another hat. This individual choice is the personality of art, no matter how it’s derived. Rockwell’s personality inclined him to show a loving, benign, optimistic America, where good things happened regularly. The great artists, illustrators or not, leave a trail of their own personality.

PS: “Even if it isn’t an ideal world, it should be. So I painted only the ideal aspects of it — pictures in which there are no drunken slatterns or self-centered mothers. Only foxy grandpas who played baseball with the kids, and boys who fished from logs and got up circuses in the backyard.” (Norman Rockwell) 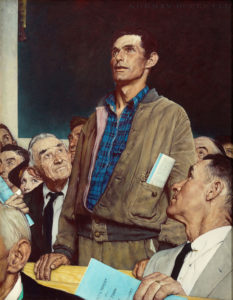 Freedom of Speech, from the “Four Freedoms” series, 1943
Story illustration for The Saturday Evening Post, February 20, 1943
by Norman Rockwell

Esoterica: In my book, it’s the cultured ability to select and reject that makes or breaks a painter — and it mostly comes from within. Sometimes a second opinion can be valuable. When I visited Norman Rockwell he was painting a portrait of Richard Nixon. Quite openly he surprised me by asking if his depiction of Nixon was “not threatening enough.” Intimidated, I missed an opportunity. I told Rockwell I thought his President was just fine the way he was.

This letter was originally published as “Selection and rejection” on January 7, 2011.

“Some folks think I painted Lincoln from life, but I haven’t been around that long. Not quite.” (Norman Rockwell)