You are at:Home»Letters»Strong and wrong
By sara genn May 14, 2019 Letters

My daughter, Sara, and I are again up to Lake O’Hara and Yoho National Park in British Columbia. Today, in the champagne air of a place known as “The Hanging Gardens of Babylon,” both of us are struggling with extra-large canvases. We’ve come this high with a little help from our friends, and we’re talking about “strong and wrong.” It’s a term currently used by some of Sara’s New York musician friends. Apparently it’s better to blow a strong note off key than to produce a wimpy one that doesn’t get noticed.

Sara Genn at the ‘Hanging Gardens of Babylon,’ below Cathedral Mountain, 2009. “We’ve always felt a sense of ‘event’ in outdoor painting.”

Here in this grandeur where boldness has dominion, big statements seem appropriate. This place was formed in fire and reorganized by ice. Those mountains are strong. These rocks are monumental. These skies are so powerful and move so fast between the peaks, you can’t really grab ’em. Let ‘er rip.

A line of hikers is far below on a zigzag pathway. Sometimes we glimpse others climbing the distant cols or moving slowly along the windy ledges. All around there’s a spirit. Something’s happening in this amphitheatre beyond boots and poles, backpacks and water bottles. It’s something to do with worship.

“A 30 x 34 underway on the meadow above Lake McArthur. The metal easel is a Soltek. The lightweight parasol is held with bungees. The rig only blew over once.”

For us paint-pushers it’s all about inhaling, so much so that one can be out of breath trying to climb Nature’s truth. Our audacity seems impudent. Nearby, there’s a place called “All Souls.” We don’t know how it got its name, but we can guess. As if anyone can enter, we find the best path is to simply accept the test. In the words of the English poet Robert Browning, “I count life just a stuff to try the soul’s strength on.”

Every time we return, we feel it again. There’s the mystery of creation, the evidence of sweeping powers, the presence of a mighty hand. Cannot the little hand that mimics this be also mighty?

“This 30 x 34 inch canvas was essentially painted in two sessions. In the morning I used mostly ‘Open’ acrylics. After lunch I glazed and went back in with regular Goldens.” (Robert Genn, 2009)

PS: “Something we were withholding made us weak until we found it was ourselves.” (Robert Frost)

“Strong and wrong in the magic hour. Actually, what you pick up is a kind of irrational exuberance and appreciation for life itself. It’s pretty heady, like champagne.”

Esoterica: A benefit in painting, not available to musicians, is the ability to cover or quickly remove bloopers. What’s a blooper between friends? As we say in the cover-up-your-sins world of acrylics, “Nobody knows what’s under there.” But a bold early statement is often key to a stronger work. Later and lesser strokes become just grace notes to the greater theme. We’re noticing how valuable are the early gestures — cursory, generous, thick and large — the strong and wrong.

This letter was originally published as “Strong and wrong” on July 28, 2009.

“Two roads diverged in a wood, and I – I took the one less traveled by, / And that has made all the difference.” (Robert Frost) 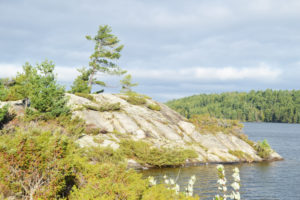 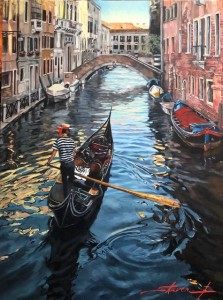