You are at:Home»Letters»Particularities
By ShawnA July 14, 2015 Letters

My late friend Bert Oudendag used to open his oil tubes from their back-ends, squeeze the contents onto a steel tabouret and carefully fold in 50% by volume of stand oil, a small amount of copal varnish and a drop of cobalt dryer. He then put the mixture back into its tube and put the remainder in a glass jar. All this was in aid of an extended and more fluid brush stroke that gave his work a kind of Franz Hals character. He was particular about his stroke. 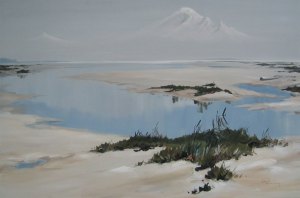 The unique blend of creativity and chemistry is what makes ours an interesting game. I’ve always noticed that when artists are fussy and particular, they are generally onto something. In Bert’s case: specific grey grounds, oily imprimatura (not linseed oil), rigid palette (five warms, one cool, plus black and white), unique brushes (specially trimmed), a special way of holding and using them (some for warm and some for cool), and unique hand-made boxes for painting storage. His studio was built around a vast bank-vault. Nobody else knew the combination. I watched him work on location many times. He would simply look for and find something that turned him on — he never asked why — then he quickly prepared himself, squeezed out, and began. Sometimes it was all over in twenty minutes. “Do not make the mistake of asking me my particularities,” he used to say, “You will have to find your own — otherwise you will lose your individuality.” 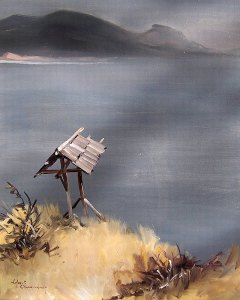 “Wooden Marker”
oil on board, 24 x 20 inches
by Egbert Oudendag

Bert kept as many as nine bicycles. “You must have a feeling for choice.” He was what we call a Renaissance man, but he always said it was important to have “French bicycles and Dutch paint.” Bert didn’t believe in wearing a bathing suit either. In the water in front of his beachside studio he would remove his Speedo and leave it attached to a fishing float. “Complete freedom is vital,” he said. When Bert died we let loose his float and impedimenta onto the high seas. 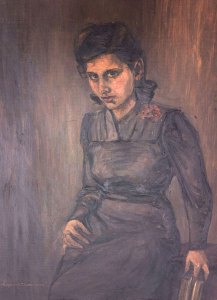 Portrait of Wim Haitsma’s mother, a present for what she did for him during the War
Groningen (Holland), 1945
by Egbert Oudendag

PS: “When painting the faces of young persons, use the yolk of the egg of a city hen, because they have lighter yolks than those of country hens.” (Cennino Cennini)

Esoterica: Cennino Cennini (1370-1440) was a Florentine painter who wrote a craftsman’s handbook that marks the transition between medieval and Renaissance art concepts. He offered detailed advice on the techniques of painting. At the same time he was one of the first to call for the use of imagination in art and to elevate painting from artisanship to fine art.

This letter was originally published as “Particularities” on December 11, 2001.

Recently, a letter arrived in the inbox from Wim Haitsma, which read in part, “Dear friend of Egbert Oudendag, I got from my late mother a portrait signed by Egbert Oudendag, 1945, painted in Groningen, Holland. She was 21 years old. As I understood it was a present for what she did for him in the war.” No other particularities are mentioned.