You are at:Home»Letters»Creativity by committee
By sara genn September 18, 2020 Letters

Last summer, after being invited to submit to an open call, artist Lava Thomas’ proposal for a public monument was selected amongst hundreds of applicants and three finalists. The work, as part of the city’s effort to remedy the fact that out of 87 public monuments in San Francisco, only two represent women, is slated for the outside of the main branch of the San Francisco Public Library. It would honour the life and work of writer and civil rights activist Maya Angelou. Thomas, whose practice spans figurative drawing, painting, sculpture and installation, proposed a nine-foot-tall freestanding book made of bronze and etched with a portrait of Angelou’s face, a nod to the library and Black art, referencing the rectangular Benin bronzes of West Africa. Inscribed at the base would be a quote from Angelou: “If one has courage, nothing can dim the light which shines from within.” Two weeks after her proposal was chosen however, the selection committee suddenly rescinded its offer, with a singular complaint that Thomas’ proposal wasn’t a statue. 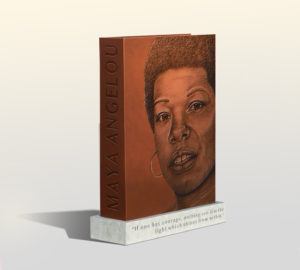 Rendering of “Portrait of A Phenomenal Woman”
by Lava Thomas (b.1958)
Eren Herbert image

“As I carried the legislation across the finish line to elevate women in monuments, I wanted to do it in the same way that men have been historically elevated in this city,” explained San Francisco Supervisor Catherine Stefani, the sponsor of the project. Stefani asked the commission to restart the process from the beginning, this time with clearer guidelines for a “significant figurative representation.” The initial design brief had specifically crossed out the word “statue” in favour of the word, “artwork,” with an aim at receiving proposals that were contemporary and forward-looking.

“Patriarchy is so fossilized in her mind that she doesn’t even realize what she wants is anti-feminist,” said Thomas, at a public meeting held to address the selection withdrawl. Thomas had spent months requesting further information about the decision through the city’s freedom of information laws and had received no response. “I can’t believe that we’re here two months later with a suggestion that this project be closed, and a conservative, traditional statue in the manner of European figurative traditional monuments — that Confederate and colonial monuments are based on — that we are here discussing this in this city, San Francisco, that’s known for its progressive politics.” Toward the end of her speech, Thomas’ mic was muted and she was refused extra time. 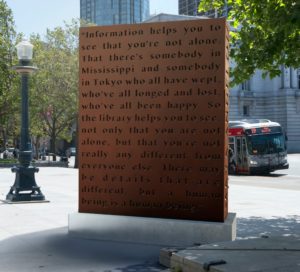 PS: “Prejudice is a burden that confuses the past, threatens the future and renders the present inaccessible.” (Maya Angelou)

Esoterica: After an uproar, San Francisco Arts Commission president Roberto Ordeñana apologized to Lava Thomas and the commission voted unanimously to suspend the new selection process until they could find a way to be more transparent. Meanwhile, with no new timeline and the city-mandated deadline for increased representation of women in public art fast approaching, the project’s budget has swollen from $180,000 to $250,000. “Yes, Lava [Thomas]’s proposal is challenging conventions of sculpture and monument and representation. That’s exactly what we want our art to do, and if it makes you feel uncomfortable, then that means she is doing her job.” (Angela Hennessy, artist, professor at the California College of the Arts and member of the San Francisco Arts Commission’s Visual Arts Committee.) 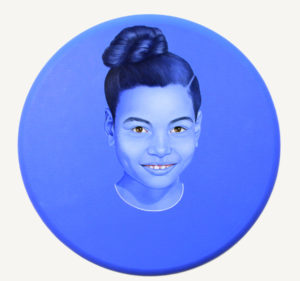 Self Portrait, 2013
Water Based oil on canvas
24 inches diameter
by Lava Thomas as part of her ongoing project “Childhood,” which depicts the realistic colors of the subject’s teeth, gums and eyes, while the skin and hair incorporate shades of ultramarine blue – historically the most expensive pigment used by Renaissance painters.

“Information is so important, and it must be open. Information helps you to see that you’re not alone. That there’s somebody in Mississippi and somebody in Tokyo who all have wept, who’ve all longed and lost, who’ve all been happy. So the library helps you to see, not only that you are not alone, but that you’re not really any different from everyone else. There may be details that are different, but a human being is a human being.” (Maya Angelou)