You are at:Home»Letters»The distraction technique
By sara genn September 22, 2020 Letters

Last Sunday at 2 p.m. my friend Murray came to the studio. He brought with him a very nice 1999 “Carmen” Chablis (Chile) as well as some ripe Limburger and a good Brie. He even brought his own wine glasses and napkins. Although Murray’s not an artist — he’s a retired insurance salesman — we’ve been friends for years. Very diplomatic and polite (he comes from the old school), he never once mentioned what I was doing or what I had going on my easel. We talked about all the stuff that interested him — politics, golf, investments, food, wine, insurance. He told me about how he had once sold more “whole life” in one month than anyone else in his district — more than anyone else in his office in a whole year. As I painted, Murray picked up a stray chair and moved it around so he could have eye contact with me. When he finally left four hours later, I noticed that I had done the most part of a 36″ x 40″. 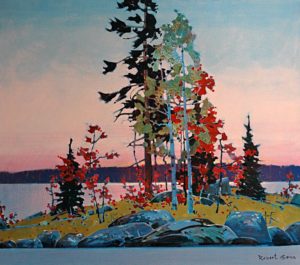 Barely conscious of my painting process, I nevertheless caught onto some things that were happening. The emergent painting went slower and more deliberately than normal. While I listened and responded, there were pauses where another part of me was considering my various moves. I noticed tentative assays that were somehow overruled. There was a pleasant amount of patience. I was thrilled to hear of the passion that Murray had brought to his career — it gave me that “worthwhile” feeling — a sense of righteousness and accomplishment in my own choice of life path. As we talked and my empathy for him grew, I identified with his life as a salesman. I saw how, on our ride on this carousel, we all do our best with what we have been given. A sense of elan, a feeling of mastery, had me holding the brush by the end, gesturing, flourishing. No, I wasn’t showing off. I was being what I could become. Our friendship, our enriched conversation, and the soft, unbusinesslike space of an unspoiled Sunday did the job. His gift was a blessing of time and the use of my other brain.

Eventually we looked at our watches. He had to go. As we were gathering up the stuff and tossing remains of Brie to Dorothy, I asked him what he thought about someone sitting around and painting pictures. “It’s not for me,” he said. When he got into his four-by-four, he rolled down the windows and cranked up The Ride of the Valkyries. Then he sailed away as if he had just closed a big sale. 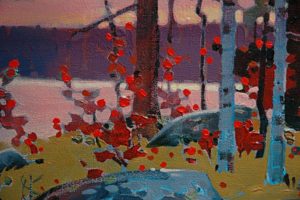 PS: “All the world’s a stage, and all the men and women merely players.” (William Shakespeare)

Esoterica: What’s going on here? The human brain is a map of evolution. At the base of the brain are the most primitive functions, the unconscious automatic things like breath regulation, the heart, fight or flight, etc. As you go up and forward, the functions advance and become more human. This base is called the “lizard brain” because it’s the part of the brain that we have in common with lizards. The lizard brain holds what Harvard psychiatrist Dr. Daniel Siegel calls the “fog of fear.” Regarding our creative competence, many artists carry the fog of fear in spades. The idea is to find ways to penetrate this fog. Simply stated, relaxation and the distraction of good company are what put the lizard to sleep and gave play to a half-decent painting. 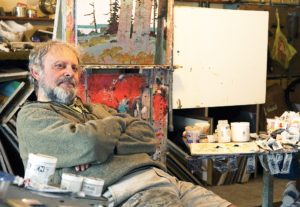 This letter was originally published as “The distraction technique” on September 30, 2005.

“Art is a course in personal development that has no reliable diploma and no known end. The pursuit of art instructs in beauty as well as ugliness, fantasy as well as common sense. Art levels souls and baffles brains. Art softens pain because it is pain. Art gives joy because it is joy.” (Robert Genn)