Esoterica: A useful exercise is to look at subject matter and try to see human qualities. “Anthropomorphic” means seeing human form in inhuman objects. Trees pray to the sky, brooks babble, bunnies giggle. “When a painter does a work that appears to be false and lying, that falsity may be the truth.” (Michelangelo) “The truth is more important than the facts.” (Frank Lloyd Wright)

America that might have been
by Jerry Lucey, Mexico

I do so much enjoy the idea of creating my own world within my art, since the vast majority are scenes of Americana, I think of it as the America that might have been, but never was. Something in the painting might exist, but then it is transferred in time or place. Most of the basic information has been gathered in my travels of the back roads of the United States and Canada. A lot is a mental file, fond memories. Now, I live in Mexico, but north of the border still dominates my work.

Being self-taught I did not even know such a term as veduta ideata existed. Just as when you first sit down to talk to someone — you first make a connection on a visual level — then you begin communicating and registering on a different level. This is true in communicating with paintings. In most work there is a certain visual recognition and acknowledgement — then the other more essential elements, if you put them there, take over and form the main basis of appeal.

It seems to me that by pre-naming a painting that is being done strictly from imagination drafted elements might be brought into a position of control. This might defeat the potential truth and beauty by beating them down with facts.

After seeing Emily Carr, Charles Burchfield, Marsden Hartley and others take landscape paintings to wild and unexpected places, I was freed up to respond to landscape in my own way. The watercolors, 26″ by 40″ that I did after spending time in the American Southwest just poured out of me, they are about the feel and mystery of the land, and how people have related to it over time. My Bolivian friend’s term for my landscapes is viajes interior, or interior voyages.

Your six year olds’ question of ” where’s that?” reminds me of an anecdote in The Writing Life by Annie Dillard. It seems the little boy asked, “How do you write (a story)?” Taking him at his word she gave him the blow by blow process. Then, with the exasperated sigh of a child used to being misunderstood he said, “No, do you write with a pencil or use a typewriter?” When someone asks about my art I usually try to find out what they mean before I answer. Do they want the truth or just the facts?

Changes from the mind
by Lynette Byers

Today I received the first of many, I hope, of your letters. I wasn’t sure what to expect but I was very pleased. I have been trying to paint a picture exactly as I had photographed it and was having some problems. Now I can’t wait to get back at it and put in some changes from my mind.

Most of the excitement for artists involves the effect that their imaginations might make on commonplace subject matter. This is what keeps us alive. But the general collecting public has long since preferred the conservative images. They haven’t traditionally wanted too much mind stretching. Even the so called avant garde collectors pretty much buy what they are sold — assured by agents and dealers of the safety of collecting “unsafe” art. There are times when I think things are changing for the better, but in a mistaken world with mistaken motives it is only minor.

The way to create effective veduta ideata is to allow crossover ideas to come in. Crossover ideas come when you sit back and allow your mind to “play” with a subject. Very often I will copy a female image from a fashion magazine and then make moves to say enlarge breasts and narrow waists. From there it is easy and possible to give her the head of an insect or the appendages of a crab.

I knew that there was a name for my style of painting! “veduta ideata” Or as I would say, not knowing this term, it was “out of my head.” I prefer to paint in this manner over any reference aids. I find the challenge of making something look realistic from memory alone is the most rewarding. Just as one studies a photo for detail, I’ll study nature, then lock it into my memory and use it in future paintings.

One of my teachers, the great painter Joseph Mendez, pointed out that in the initial stages of laying in the composition, everything should be as thin and flexible as possible so that corrections can be made, shapes moved, drawings altered until that final composition is right and good to go on to the next stage. In the words of Ms Frizzle of The Magic School Bus, “Get messy, make mistakes!”

Approaching one’s easel as if one were a bullfighter is a very male take on doing art — a ‘conquest’ type of mentality, an attitude of “I’m the one in charge here and I’ll do it my way!” While I’m sure there’s room for that in art sometimes, I prefer a gentler approach, in the line of “The Zen of Seeing,” where one becomes one with their subject matter, with their materials, with the very act of making art. Bullfighting may be a lot of fun for the matador (although I’ve been to one and was both grossed out and deadly bored), but the end result of a bullfight is that a fine animal gets killed. I don’t want to ‘kill’ my paintings, my subject matter or my art making sensibilities. I want to be one with all of them.

I have a bug issue. I’m painting in a studio space that has a canvas roof and many entry spaces for birds and bugs. The birds that have nested haven’t been a problem thus far, but the bugs are a challenge. They seem to be attracted to the oil paint. I am not bothered while I’m painting, but when I return to the studio the next day there are bug body parts, wings and such stuck in the paintings. Do you have any thoughts about this?

(RG note) On one oil-painting trip I had a friend so concerned about my stuck bugs that he tweezed them out–and called himself a professional debugger. Subsequently I leaned that some paint thinners, including turpentine, attract them–particularly mosquitoes. The switch to a Grumbacher product called Grumtine cut them down remarkably. Gamblin Colours and other colourmen have odourless or lemon-smelling thinners. Paintings left in bug-infested areas at dusk and dawn will pick a few under any circumstances. Bring oil paintings inside at night. For plein air painters a bug or two adds authenticity. Birds, on the other hand, give a joyous presence to a studio. Encourage them, for they may not always be with us. Some cut down the bugs. Yesterday morning a white-crowned sparrow came in to my studio. After a while I caught him against the glass and set him free in an attempt at good Karma. 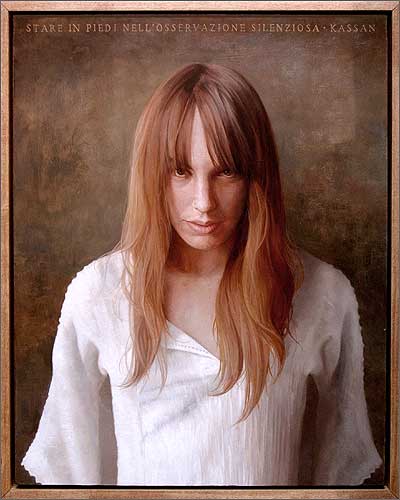 That includes Mary Jean Mailloux who wrote, “To quote a good artist friend Joyce Kellock, ‘Why let what you see get in the way.’ ”

And Bev Willis of Fresno, California who wrote, “I wouldn’t want all paintings to be imaginary, but more would be nice.”

And also Pippi Johnson who wrote, “It has been my experience that just when things are going swimmingly, someone gets chicken-pox, the fridge breaks down, or a friend’s marriage is breaking up. The art stuff has to go on the back burner. So in preparing for shows I’m always well ahead. That way, if I do have time I can knock off a really great one.”

And also Tim Whyte, of Banff, AB, Canada who wrote, “Your lessons, sermons and chats are applicable to all journeys in life. Your letters are of incredible service to young artists and in fact any student of anything at whatever stage in development.”