You are at:Home»Letters»Painting without sight
By sara genn February 1, 2022 Letters

Recently there has been a bit of excitement around the painter Esref Armagan. The 51-year-old native of Istanbul, Turkey, has been blind from birth. Researchers at Boston University and the University of Toronto have been analyzing his work, trying to dig into and understand his thought processes. They bombard him with questions and subject him to brain scans while he paints. His work, which could be characterized as naïve or primitive, nevertheless shows some use of perspective and other sight skills. So you get an idea of what I’m talking about, see below for samples of his work. 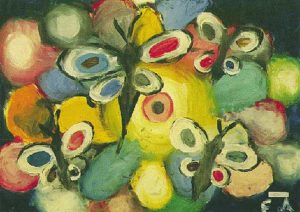 For the blind, being able to draw objects such as cups, fish or hammers is one thing. For these tests Armagan used the “Sewell raised-line drawing kit.” This device leaves a Braille-like line that can be felt with the fingers.

Being able to visualize and paint distant scenery in colour is something else. It’s safe to say that a tactile understanding of objects such as cubes, cones, spheres, etc., go a long way toward building a “hand’s eye” picture. “A house is like a box,” etc. Just as a sighted person looks out and sees, the blind reach out and feel, and this produces a similar understanding of the forms in our world. But Armagan’s use of colour and cast shadow presents further areas of interest. For a while he thought that shadows should be the same colour as the objects that cast them, but someone corrected him on that. While he claims no formal art teacher, his knowledge of light sources and colour choices come from the more or less casual remarks of those who look over his shoulder. 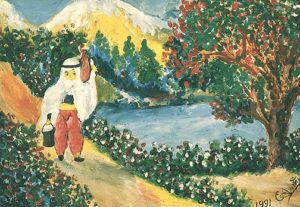 What I find so interesting about these studies and their results is not the quality of the work, but what appears to be the similarity to the processes, pitfalls and desirable effects experienced by sighted artists. The verbal nature of things helps to inform the “mind’s eye” and interferes with the actual image on the “eye’s-eye.” In Armagan there is no eye’s-eye — not even the perception of light. In him we have the extreme end of theoretical imaging. Wonderfully though, his world is just as real as any other painted world, and therein lies both its faults and its charms. One wonders what would happen should he turn his mind to thoughts of abstraction. 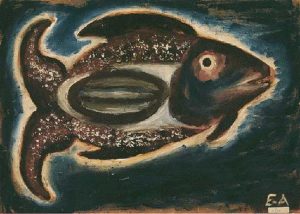 PS: “Mr. Armagan is an important figure in the history of picture-making, and in the history of knowledge. He has demonstrated for the first time that a blind person can develop on his own pictorial skills the equal of most depiction by the sighted. This has not happened before.” (John M. Kennedy, University of Toronto)

Esoterica: Armagan first draws his composition using a Braille stylus. Working with his fingers in oil or acrylic he fills in his colours. He says he feels it — as if he was “in it.” In painting the sea, for example, he says he should wear a life preserver in order to prevent drowning. According to the results of the brain scan, areas of his visual cortex light up as if he was seeing. This also suggests that the seeing of both sighted and unsighted persons is somewhat a matter of belief.

This letter was originally published as “Painting without sight” on February 1, 2005.

“I shut my eyes in order to see.” (Paul Gauguin)