You are at:Home»Letters»The ultimate curiosity
By sara genn December 1, 2020 Letters

Having spent the afternoon in the Picasso show at the Seattle Art Museum, I’m laptopping you from a quiet café near First and Spring. Right now I’m digesting those Picassos along with a nice set of Samish Bay oysters. 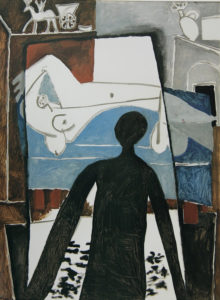 The museum was a hefty bash. For many, seemingly exposed to his originals for the first time, it was puzzling and curious — the prodigious output, the variety of styles, the relentless change, the parade of wives, mistresses, kids. “If you want my biography, look at my art,” said Picasso. People were looking closely, glued to their audios. The collection, borrowed from the currently renovating Musee National Picasso in Paris, represents the very hinges of Twentieth Century art. From the first tentative art school efforts to the mature cubist abstracts — and all the periods in between — it’s a feast. Behind every work there’s a story.

In room 5 we see an unresolved return to realistic painting — a delicate portrait canvas of his first wife Olga and another one of their son Paulo. “A deliberate technique,” we’re told by the intellectual on the audio, “to leave areas unfinished to remind us that we are looking at a painting — an act controlled by the artist.” One might also wonder if he abandoned these paintings because he realized he was outflanked in this department by others. It’s the story of a life with serial and overlapping women. Beautiful in their distortion, classical, submissive, combative, complacent, unreachable. 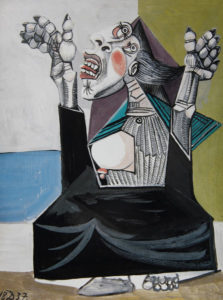 We come to the reclining nudes, active demoiselles and energetic cubistic torsos — club-footed, sausage-fingered women seen from front and side at the same time. The real thing beats the picture books. You feel his mind, his cover-ups, his impatience, his adulation, his angst, his fetishes. Everywhere is ego, ambiguity, stabbing energy and a flamboyant creativity. In the last room, lettered discreetly across the wall: “God is only another artist. He invented the giraffe, the elephant and the cat. He just goes on trying other things.”

PS: “The rich and the idlers seek the new, the extraordinary, the extravagant and the scandalous. I have contented these people with all the many bizarre things that come into my head. The less they understand, the more they admire it. By amusing myself with all these games, all this nonsense, all these picture puzzles, I became famous. I am only a public entertainer who has understood his time.” (Pablo Picasso, 1881-1973)

Esoterica: Then there’s the archiving — signing, dating with Roman numerals. It’s as if he knew even at an early age he was precious and important. I was taking notes in my little black book when a heavy-set guard pushed up to me. “No ball-point pens in the museum,” he said, gruffly. “So here’s a pencil,” he added. Ambiguous, like Picasso himself, I thought. The guard had a pocket full of stubby pencils to give to the ignorant carriers of dangerous implements.

This letter was originally published as “The ultimate curiosity” on December 3, 2010.